By Nhieu Bo in Announcements on February 24, 2015.
By
TATYANA SHUMSKY in New York,
JOHN W. MILLER in Cape Town, South Africa, And
RHIANNON HOYLE in Sydney

Mining companies, slammed by tumbling commodities prices, have in recent days vowed not to cut production, saying the stronger dollar is cushioning the blow of falling markets.

Companies ranging from Australian miners BHP Billiton and Rio Tinto to smaller firms like South Africa’s Lonmin PLC are benefiting from the stronger greenback because they receive dollars for the gold, copper and iron ore they dig up, but pay for labor and many other costs using local currencies. When the dollar rallies, revenue generated by metals sales stretch further in covering expenses. 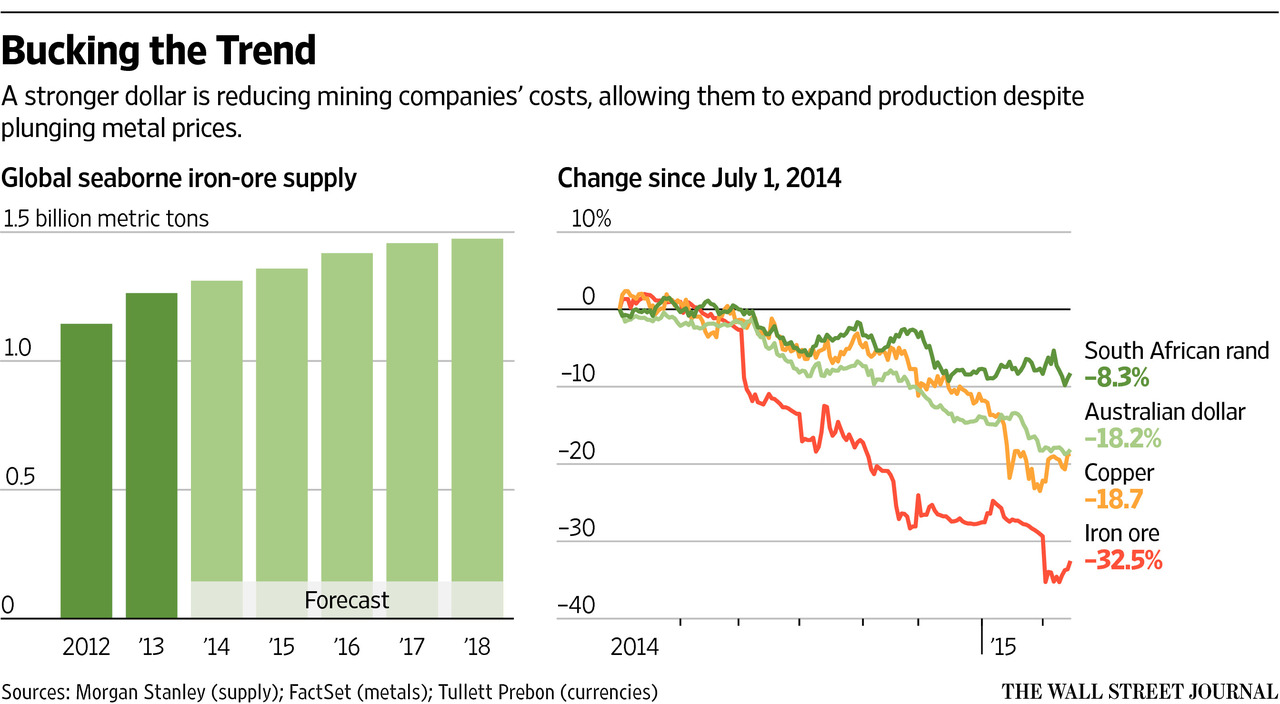 The dollar’s rise is reverberating across the global economy, dividing the corporate world into winners and losers along geographic lines and reshaping the next phase of commodities prices. The greenback rose against virtually all currencies in 2014 and is off to a roaring start this year, as some central banks around the world, reaching for new ways to boost sluggish economic growth, take steps to devalue their currencies.

Some of the dollar’s biggest gains this year are against the currencies of major commodities exporters. As of Friday, the buck was up 5% against the Australian dollar, 7% against the Canadian dollar and 7% versus the Brazilian real.

For many U.S. firms that do business abroad, the strong dollar is an unwelcome development, making their wares more expensive for buyers in other markets and reducing the value of foreign sales when translated back into U.S. currency. But mining companies that might otherwise be forced to mothball projects at today’s commodities prices are keeping mines open and, in some cases, ramping up production as currency moves reduce costs.

As a result, supplies are continuing to increase, and analysts are tearing up their forecasts for metals prices, predicting they will fall lower and stay there longer.

“Currencies have been a relief valve,” said Ben Magara, chief executive at Lonmin.

On Friday, Anglo American PLC, the fifth-largest mining company in the world by market capitalization, became the latest company to highlight the benefits of a stronger greenback. The U.K. firm, which reported a loss for 2014, nevertheless said weaker currencies in the countries where it operates added $1.3 billion to its profit. That was more than half the $2.4 billion hit the company took from lower commodities prices. Anglo also said it plans to boost iron-ore production at mines in South Africa and Brazil in coming years, even as prices for the key steel component trade near 5½ year lows.

Rio Tinto on Thursday reported a rise in profit, saying the weaker Canadian and Australian dollars helped boost margins. Newcrest Mining Ltd. said Friday that it would put one of Australia’s biggest gold mines up for sale in a decision that could help it pay down debt, a move that was possible because the sliding Australian dollar made the mine more attractive to potential buyers.

However, some observers said a stronger dollar will only postpone an inevitable reckoning for the mining industry. By keeping mines open, they are feeding a global glut of metals, coal and iron ore. Demand is sluggish from China, the world’s top commodities consumer, where the economy expanded at its slowest pace in decades last year. And many mining companies borrowed heavily, in dollars, to expand during the boom times; they need profits above a certain level to pay back creditors.

“The stronger dollar has been cushioning some of the blow of weaker commodity prices…but not all,” said Daniel Rohr, director of materials research with research firm Morningstar Inc. “Miners need to grow production, deliver cash to shareholders and maintain a strong balance sheet, and in a weaker price environment you cannot do all three.”

Lonmin has seen prices for platinum, its main product, drop 20% since July. But Mr. Magara said Lonmin would maintain output this year. He credits the greenback’s surge against the South African rand, which he said has lowered costs in that country. The dollar hit a 13-year high against the rand on Wednesday.

The rand’s decline “has been very helpful,” Mr. Magara said. “We’ve gained around 10% thanks to the currency, so the impact of the [platinum] price has been mitigated.”

Lonmin, like many mining companies, still faces headwinds. After a decadelong rally in metals prices, the mining industry has spent the past three years adjusting to a weaker demand environment. China, whose ascent to the world’s second-largest economy behind the U.S. came alongside rapid urbanization and industrialization, has seen its thirst for raw materials moderate.

Metals prices have plunged. Copper fell to a 5½-year low in January and is down 7.8% this year. The price of iron ore nearly halved last year and is off more than 10% in 2015.

Lonmin reported a loss of $188 million in the fiscal year ended Sept. 30, because of falling platinum prices and a strike at its South African mines. Glencore PLC said last week it would divest its 23.9% stake in the company.

Some mining companies have retrenched, shutting down mines and selling assets. In addition to selling its Lonmin stake, Glencore warned in January that it could close coal mines in South Africa. Meanwhile, others have ratcheted up production.

BHP Billiton, the world’s biggest mining company, reported record output from eight operations across five commodities in the second half of last year. In the two years to June 2015, it said it will have increased total production by 16%, despite broadly weaker commodities prices. Rio Tinto increased iron-ore and copper output last year. 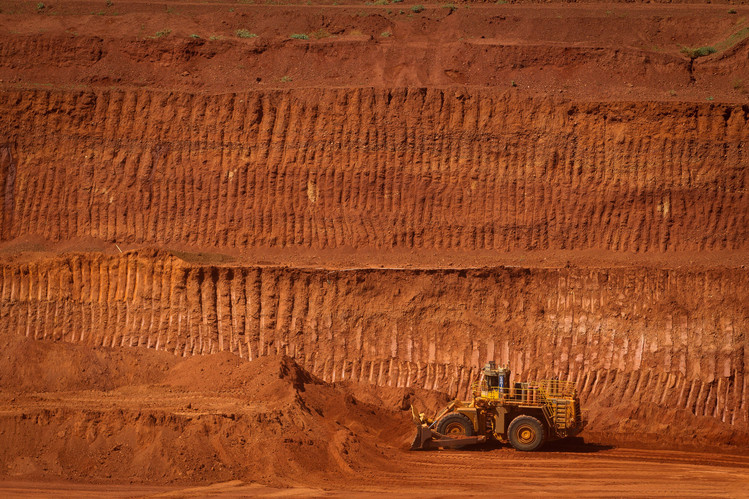 ENLARGE
The price of iron ore nearly halved last year and is off more than 10% in 2015.Machinery operates in a pit of the Rio Tinto West Angelas iron ore mine in the Pilbara, northwest of Perth, Australia, on Sunday, Feb. 19, 2012. Photographer: Ian Waldie/Bloomberg News ***Local Caption*** Published Credit: Bloomberg NewsPHOTO: BLOOMBERG NEWS

But analysts and investors said there is a limit to how much the stronger dollar can help the mining industry. “With sales, profitability and cash flow coming down, it will impact mining companies’ ability to service their debt,” said Wen Li, senior analyst with CreditSights.

Still, some miners, at least in the short term, see a silver lining.

Andrew Cole, managing director of OZ Minerals Ltd., a copper-and-gold producer in Australia, said the sinking Aussie dollar comes as a relief. The company’s stock plunged nearly 80% in the past four years on weakening metal prices and dwindling cash reserves. But Mr. Cole said a favorable exchange rate is giving him breathing room to improve the company’s prospects.

“The drop in the currency has been somewhat overdue” and “is certainly beneficial to us,” Mr. Cole said.

For Phoenix-based Freeport-McMoRan Inc., one of the world’s top copper producers, a global footprint that includes mines in Chile, Indonesia and the Congo is helping keep down costs. Freeport said its average unit cash cost for producing copper will increase only 1.3% this year.

For the global mining sector as a whole, the relative winners right now are companies with operations outside the U.S., said Rick de los Reyes, who manages a $1.5 billion metals portfolio at T. Rowe Price Group Inc.

← On work hours in the US and Europe Food Stamps →