In a health report card published in September, titled “F as in Fat,” the Robert Wood Johnson Foundation and the Trust for America’s Health1 predict that half of all American adults will be obese by 2030.

The report also predicts obesity-related illness will raise national health care costs by $48 billion annually over the next two decades by adding another 7.9 million new cases of diabetes, 5 million cases of chronic heart disease and stroke, and 400,000 cancer cases – all courtesy of Americans’ ever-expanding waistlines.

That prediction is only slightly more dire than the American Journal of Preventive Medicine‘s projection that 42 percent of all adults will be obese by then.2 According to the authors,

“If obesity were to remain at 2010 levels, the combined savings in medical expenditures over the next two decades would be $549.5 billion.”

That’s no chump change, especially in light of the current struggles to keep Medicaid going, and the fact that medical expenses not covered by health insurance is one of the top reasons for personal bankruptcy in the US. Most families are already only one bad diagnosis away from a financial catastrophe and many are at risk of abject ruin should their health fail.

To me this is yet another compelling argument to stay as healthy as you can by following the recommendations on this site, many of which cost next to nothing. All you need to do is give your body the raw materials like healthy unprocessed food, sleep, exercise, appropriate amounts of sunshine to optimize your vitamin D levels, love, emotional balancing and staying away from toxins and poisons and you probably won’t need to set foot in a doctor’s office or hospital, outside of an unfortunate accident.

I recently updated my nutrition plan, which will guide you step-by-step in accomplishing these basic goals. It summarizes all I have learned from treating over 25,000 patients and reviewing tens of thousands of articles on natural health. It is divided into three levels, so you can customize it for your current level of health. It’s a free resource that can help you and your family radically improve your health.

Even in a healthy economy, it is wise to follow ideal health guidelines, as all the money in the world will not protect you from disease if you fail to follow a healthy lifestyle. However, in this troubled economy, poor health has the potential to ruin you financially – which will only make everything worse. And clearly, maintaining a healthy weight is a major part of optimal health. Remember, treatment of disease is the number one cause for bankruptcy in the US, not being underwater on a mortgage…

Are You On Your Way to Becoming a Statistic?

It has been my experience that many people are in denial about being overweight. One effective and simple method to figure out if you have a weight problem is as follows: With a tape measure, comfortably measure the distance around the smallest area below your rib cage, above your belly button. Waist circumference is the best and simplest anthropometric measure of total body fat.

It is far better than BMI (body mass index), which fails to factor in how muscular you are, and is also the best indicator of intra-abdominal fat mass (the dangerous type of fat around your internal organs strongly linked with type 2 diabetes, heart disease and nonalcoholic fatty liver disease). Your waist size is also a powerful indicator of insulin sensitivity, as studies clearly show that measuring your waist size is one of the most powerful ways to predict your risk for diabetes.

If you’re not sure if you have a healthy waist circumference, a general guide is: 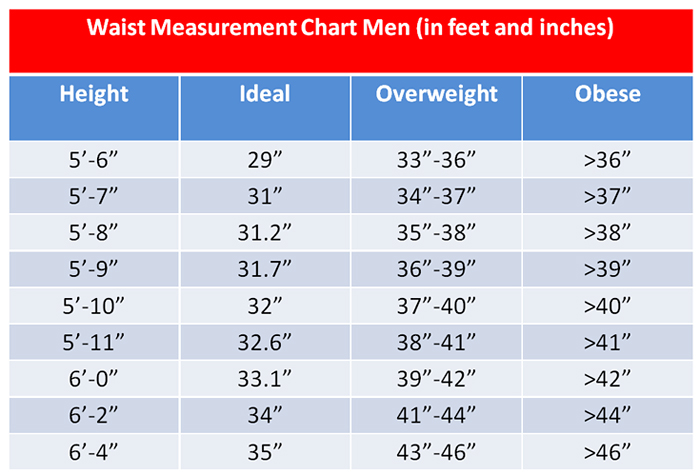 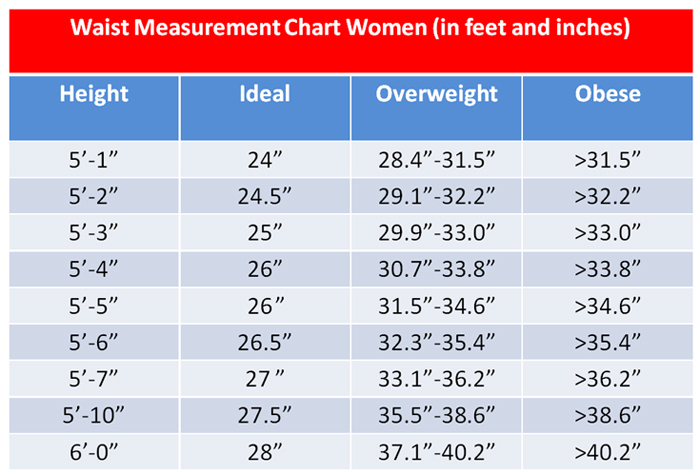 How to Gauge Your Body Fat Percentage

The other tool, which many experts are now leaning toward as the most accurate measure of obesity, is body fat percentage. As it sounds, this is simply the percentage of fat your body contains, and it can be a powerful indicator of your health. Too much body fat is linked to chronic health problems like high blood pressure, high cholesterol, heart disease, diabetes, and cancer. Too little body fat is also problematic and can cause your body to enter a catabolic state, where muscle protein is used as fuel. A general guideline from the American Council on Exercise is as follows:

Body fat calipers are one of the most trusted and most accurate ways to measure body fat. A body fat or skinfold caliper is a lightweight, hand-held device that quickly and easily measures the thickness of a fold of your skin with its underlying layer of fat. Taken at three very specific locations on your body, these readings can help you estimate the total percent of body fat within your entire body.

You can also use a digital scale that determines body fat, which is what I use personally. I use an Eat Smart Precision GetFit Body Fat Scale that I picked up from Amazon for around $50. Although many body fat measurements can be inaccurate, they are nearly all more accurate than BMI, and are particularly useful to determine whether you are gaining or losing fat.

Although the absolute value may be off, the direction you are going (whether your body fat is going up or down) will be very accurate, and this is an incredibly useful measure of whether you’re nearing your health goals or not. Remember that it is FAR better to monitor your body fat percentage than it is your total weight, as the body fat percentage is what dictates metabolic health or dysfunction – not your total weight.

The Links Between Obesity and Altered Taste

In related news, a recent study found that the taste buds of obese children are less sensitive than normal weight children.3 The German researchers administered taste tests to 99 obese children and adolescents and 94 of normal weight. Each child tasted 20 strips of paper treated with four varying concentrations of the five known tastes:

A perfect score of 20 meant the subject had correctly identified each of the five qualities at all four levels of intensity. The total scores ranged between 2 and 19, with the obese group averaging a score of 12.6, compared to an average score of 14.1 in the normal weight control group.

According to the authors:

The implication, of course, is that taste is not only an individual perception, your health may also play a role in determining how food tastes to you. I say “health” rather than “weight,” because as your weight increases – and especially as you get into the obese category – you become increasingly more insulin and leptin resistant, which will in and of itself alter your eating habits. Insulin also appears to play a role in regulating ghrelin (a.k.a. “hunger hormone”) levels, further strengthening the links between insulin and food intake control and/or sensations of hunger.

To illustrate how this works, let’s say you eat a sugary dessert. Your production of insulin increases so that the sugar in your blood can be taken to cells and used for energy. Eating this sugar also increases production of leptin, which regulates your appetite and fat storage, and decreases production of ghrelin, which helps regulate your food intake. These hormones work in tandem, so that when you’ve eaten, your body knows to feel less hungry. However, researchers have now discovered that when you eat certain foods, namely those that contain fructose, this important cycle is hampered or shut down.

“A second experiment focused just on sweet taste, with participants asked to distinguish varying levels of sweetness presented on test strips. Obese and normal-weight kids all did a good job of accurately ranking the levels of sweetness, but the obese kids tended to rate the levels of sweetness lower than the other kids did. Outside the lab, that might translate to a child’s requiring a more highly sweetened food to satisfy his or her sweet tooth – which could mean more calories and perhaps add up to more pounds.”

Beware: It’s the “Sweet” that Triggers Your “Fat Switch”

Research by Dr. Richard Johnson, now published in his book “The Fat Switch,” has led to a groundbreaking approach to preventing and reversing obesity. He found that hibernating animals regulate their body weight with distinct periods of gaining and losing fat, which has been an enormously useful adaption advantage. This ability to gain “hibernation fat” – which create all the same symptoms as metabolic syndrome – appears to be regulated by a switch in the mitochondria that is turned on and off by a common food that no longer provides survival advantage to humans living in contemporary society, namely fructose.

What his research shows is that metabolic syndrome is actually a normal condition that animals undergo to store fat. It also shows that fructose consumption increases uric acid production, which causally (directly) contributes to obesity and insulin resistance. So, in a nutshell, fructose-containing sugars cause obesity not due to calories, but by turning on your fat switch, triggering your body to very effectively store fat.

Effective treatment of obesity therefore requires turning off your fat switch – by avoiding fructose, which is the trigger – and improving the function of your cells’ mitochondria.

According to Dr. Johnson:

“Those of us who are obese eat more because of a faulty ‘switch,’ and exercise less because of a low energy state. If you can learn how to control the specific ‘switch’ located in the powerhouse of each of your cells – the mitochondria – you hold the key to fighting obesity.”