The biggest obstacle to women in joining the highest ranks of the business world is a lack of family-friendly policies. That, at least, has been the conventional wisdom in recent years, and it has been embraced by progressive companies that offer flexible schedules or allow people to work from home.

But some researchers are now arguing that the real problem is not the lack of family-friendly policies for mothers, but the surge in hours worked by both women and men. And companies are not likely to want to adopt the obvious solution.

The pressure of a round-the-clock work culture — in which people are expected to answer emails at 11 p.m. and take cellphone calls on Sunday morning — is particularly acute in highly skilled, highly paid professional services jobs like law, finance, consulting and accounting.

Offering family-friendly policies is too narrow a solution to the problem, recent research argues, and can have unintended consequences. When women cut back at work to cope with long hours, they end up stunting their careers. And men aren’t necessarily happy to be expected to work extreme hours, either.

“These 24/7 work cultures lock gender inequality in place, because the work-family balance problem is recognized as primarily a woman’s problem,” said Robin Ely, a professor at Harvard Business School who was a co-author of a recent study on the topic. “The very well-intentioned answer is to give women benefits, but it actually derails women’s careers. The culture of overwork affects everybody.”

The study examined a global consulting firm, which was not named. The firm, where 90 percent of the partners were men, asked the professors what it could do to decrease the number of women who quit and increase the number who were promoted. In exchange, the academics could collect data for their research. The firm was typical in that employees averaged 60 to 65 hours of work a week.

The researchers, who included Irene Padavic of Florida State University and Erin Reid of Boston University, concluded that the problem was not women’s competing demands but that “two orthodoxies remain unchallenged: the necessity of long work hours and the inescapability of women’s stalled advancement.”

The study is being released as part of Harvard Business School’s newgender initiative, led by Ms. Ely, to use empirical evidence to discuss gender issues in business and society.

The time Americans spend at work has sharply increased over the last four decades. We work an average of 1,836 hours a year, up 9 percent from 1,687 in 1979, according to Current Population Survey data analyzed by Lawrence Mishel, president of the Economic Policy Institute. Some reasons include a more competitive and global economy as well as technology that enables people to work at any hour and location.

For low-wage earners, the problem is not too many hours but too few. Their schedules are often too unpredictable, and their wages have been rising only modestly. For many workers, a lack of parental leave or child care can create additional strains.

For elite workers, the challenge is the conflict between modern family life and a work culture in which long hours have become a status symbol.

In the study of the consulting firm, which included in-depth interviews with 107 employees, men were at least as likely as women to say the long hours interfered with their family lives, and they quit at the same rate. One told the researchers: “Last year was hard with my 105 flights. I was feeling pretty fried. I’ve missed too much of my kids’ lives.”

Men and women dealt with the pressure differently. Women were more likely to take advantage of formal flexible work policies, like working part-time, or to move to less demanding positions that didn’t involve serving clients or earning revenue for the company. Decisions like these tended to stall women’s careers.

Men either happily complied, suffered in silence — or simply worked the hours they wanted without asking permission. About a third of them, according to another paper about the same firm by Ms. Reid, would leave to attend their children’s activities while staying in touch on their phones. They also developed more local clients to reduce travel or informally arranged with colleagues to cover for them. Decisions like these tended to get men promoted. 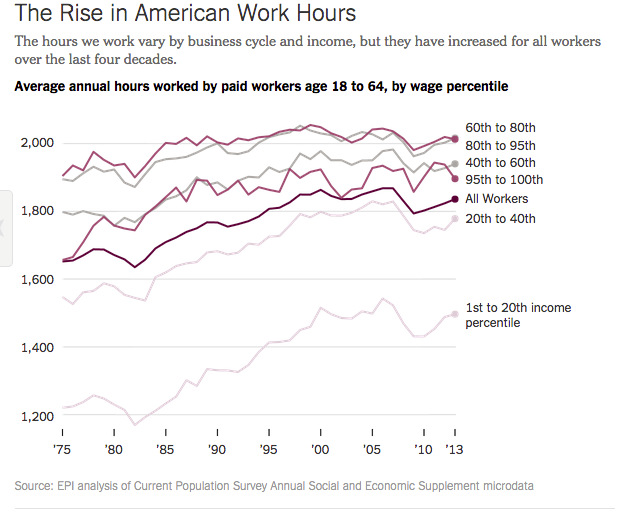 When women tried the same strategy, it usually didn’t work. When a man left at 5 p.m., people at the office assumed he was meeting a client, Ms. Reid said. When a woman left, they assumed she was going home to her children.

Underlying this disparity are deep-seated cultural expectations about how men and women should act. Men are expected to be devoted to their work, and women to their family, as Mary Blair-Loy, a sociologist at University of California, San Diego, has described in her research.

“It’s not really about business; it’s about fundamental identity and masculinity,” Ms. Blair-Loy said. “Men are required by the culture to be these superheroes, to fulfill this devotion and single-minded commitment to work.”

I don’t mind checking emails, answering calls, and even drafting memos on evenings and weekends if I have more flexibility during the work…

The researchers said that when they told the consulting firm they had diagnosed a bigger problem than a lack of family-friendly policies for women — that long hours were taking a toll on both men and women — the firm rejected that conclusion. The firm’s representatives said the goal was to focus only on policies for women, and that men were largely immune to these issues.

The challenge of juggling work and family was not always the dominant explanation given for why few women reached the top echelons of business. Another analysis led by Harvard Business School researchers tracked stories about gender and work in the national and business press from 1991 to 2009. Until the mid-1990s, most focused on sexism and harassment. Then they began focusing on women’s exclusion from the “old boys’ network.” Around 2001, the main theme became children hampering women’s career success.

It is not necessarily surprising that companies prefer to focus on relatively narrow fixes like family-friendly policies, not more broadly on the culture of overwork. They would have little incentive to encourage their employees to work less. And, of course, people who work at these companies chose high-powered careers and are paid well in exchange.

Yet some professions that also had round-the-clock hours have figured out alternatives. Certain doctors have begun working in shifts, so patients see whoever is available. Some law firms are beginning to share work in a similar way. At Boston Consulting Group, one team gave everyone one weeknight off while others covered for them, and the practice spread through the firm.

“Is it really necessary for people to be on call 24/7? The answer is increasingly no,” Ms. Ely said. “These professions are beholden to the whims of the client, and every question has to be answered immediately — but it probably doesn’t.”

← The Public Pension Funding Trap $1,000 pair of Lou Boutins worth their height in inches! →